We don't do a lot of group photos but I have wanted to put up pictures of the staff for some time now. It occurred to me that I had this picture which had most of us. The back story to the banner is: These hang in a resaurant at an annual function that takes place every year at the Golf Industry Show called TurfNet Beer & Pretzels Gala. It is the founder and Maestro Peter McCormick's way to thank all the TurfNet members and get them together once a year. One year a Superintendent, John Colo, came up with an idea that morphed into a spoof of the Where's Waldo cartoon books  called Where's Turfnet? He shipped this banner all over the country and crews posed with it for a picture and then signed and dated it. It was so popular he had to do three banners one specifically for international members of TurfNet. The banners made it to several Professional events either Sr, Regular or LPGA, with the winner of one LPGA event posing with the staff for their submission. John then had them framed and presented to Turfnet at the next B & P event.

So when I told John McKaig of this goofy scheme he jokingly asked if he could take his shirt off to make it look like he was naked behind the banner, sort of a Benny Hill tribute. It was not easy to get even this amount of staff together and after doing this John looked at the pics and deemed them too dark so we moved across the fairway and took the one submitted for the event, but we had lost Frank as he had gone back to work: 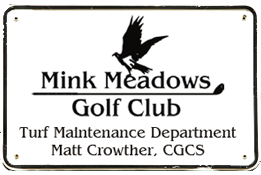